Will the growth in zero-hour contracts affect the highways sector? 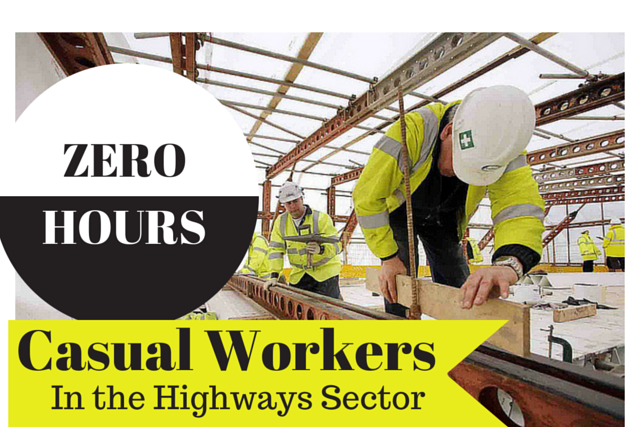 During the build up to last May’s General Election, there was a great deal of debate about the effects and consequences of so-called “zero-hour contracts”.

The hiring practice has grown in the UK. According to The Office for National Statistics’ most recent calculation from 2014, the number of people estimated to be employed on a zero-hours contract in their primary job was 697,000, representing 2.3% of all employed people. In 2013, the figure was 1.9% of all people in employment, or 586,000.

As it developed into a political hot-button issue, feelings on the issue became polarised. For the many criticisms of the employment practise, it was equally argued there can be some benefits for all parties as well.

The Facts about Zero Hours

Part of the controversy surrounding this employment practise is that the majority of British workers are confused about what a zero-hours contract really is, and what it isn’t. This isn’t hugely surprising, as there is no legal definition for the terms of the contract. Further complicating the issue is that employers and employees view the method of creating a working relationship differently.

In its simplest terms, a zero-hours contract is a work agreement whereby an employee is available to work for a company or organisation, but there is no fixed number of hours or guarantee of work. For employers, the benefit of this type of relationship is that they only need to pay people for the actual work they are doing. For employees in this relationship, there is flexibility because they are under no obligation to work or accept the offered hours.

But, although zero-hours contracts can benefit both employers and workers, they create issues about reliability of income, job security and legal employment status. They can also unfairly shift the balance of power between employer and worker.

These working relationships are often called “casual”. Experts agree this arrangement is not new in the UK. It is often cyclical and is affected by fluctuations in demand for labour.

In a recent study by ACAS, they encountered an owner of a carpentry business who employed staff on fixed-term contracts, but found the shift to zero-hours contracts had given him the opportunity to save money by only having to pay staff when there was enough work to go round.

This issue was a point of debate between David Cameron and Ed Miliband in the build-up to May’s General Election. On the Labour side, they vehemently argued against the use of zero-hour contracts – Miliband calling their use an “epidemic”. The Conservatives, on the other hand, said the number of people working in these relationships was relatively low, with Cameron repeating the ONS statistic of only 2.3% of the British workforce.

Whilst still in power, the coalition government enacted a ban on exclusivity clauses in zero-hour contracts. More than 83% of respondents to a government study found that such clauses were unfair to employees on zero-hours.

“Exclusivity clauses in zero-hours contracts prevent people from boosting their income when they have no guarantee of work,” said Nick Boles, minister for the Department of Business, Innovation and Skills. “Banning these clauses will give working people the freedom to take other work opportunities and more control over their work hours and income. It brings financial security one step closer for lots of families.”

Further improvements were made after the General Election in May. Releasing his new budget after the election, Chancellor George Osborne said there would be a new, compulsory living wage from April 2016. It will be paid to workers aged 25 and above. Initially, it will be set at £7.20 an hour, with a target of it reaching more than £9 an hour by 2020. He said both part-time and full-time workers will get the wage.

The Effect on Highway and Other Construction Trades The construction union UCATT has actively spoken out against the use of zero-hour contracts. They argue this type of employment should be banned. They say “casual” workers can lower standards and compromise site safety.

But, experts agree there is a growing skills gap in the construction industry. As reported by The Financial Times, in the last two years, the number of construction qualifications awarded through apprenticeships, colleges and universities has dropped by more than 10,000. At the same time, according to the Local Government Association, there has been a 54% increase in recruitment demand for qualified workers in the sector. Since 2009, the number of completed construction trade apprenticeships has dropped nearly 60%.

Most highways and road construction workers learn their skills on the job. In most cases, they work towards NVQs in Construction and Civil Engineering, Highways Maintenance or Road Building.

As a result of the shortage in skilled labour, the job market, especially in the highways recruitment sector, is extremely strong at the moment. There are a great deal of contract and temporary opportunities available. Job opportunities range from project/construction management staff, to engineers, to a wide variety of civil engineering and labour workers.

Often civil engineers and other technical job roles are needed for both long and short-term projects, which means being flexible in terms of long-term employment. Industry-specific recruitment specialists can help with making sure that skilled workers can get regular work. Although not the same thing as zero-hour workers, many skilled workers in the sector work on a temporary basis, and need to be flexible.